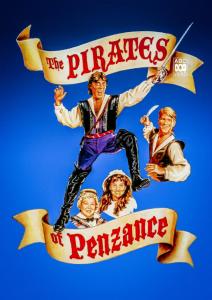 " As dazzling ...as the Best of Broadway"   Brisbane Courier Mail.

Essgee's unique brand of Gilbert and Sullivan first stormed across Australia in 1994.

It's now being performed all over the world including productions across the UK, North America and even in Germany.

This adaptation has more laughs and a more modern sound than traditional versions.

The most beautiful arias remain untouched - but the chorus numbers could be described as poperetta.

A unique feature is the women's chorus. They are known as"The Fabulous Singlettes," who mimic pop trios from the 1960s. They sing is in '50s/'60s-style close harmony.  For community theatre the three part harmony can be divided up amongst a large female chorus. The Singlettes are rather trampy. After they enter, the first thing they do is sit down on the rocks and smoke cigarettes (while Daddy's not looking).

The audience goes ga-ga over the mega-mis finale.. All the characters re-enter and sing souped-up reprises of their signature numbers.

PERUSAL AND LICENSING IN THE USA AND CANADA CLICK HERE.

Our story begins as Frederic, a young man with an unswerving sense of duty, is about to reach his 21st birthday and conclude his long apprenticeship to the infamous Pirates of Penzance. His good-hearted but hard-of-hearing nursemaid Ruth reveals that she has made a most disastrous mistake. When Frederic was just a boy she misunderstood her employer's directive and apprenticed him to a pirate instead of a pilot, as intended. Frederic tells the Pirate King (a dashing figure who never preys on orphans since he himself has had the misfortune to be one) that his freedom will be devoted to exterminating all pirates and that it would be better for the pirates to leave before midnight when his indentures are over. The pirates depart immediately and Frederic is left alone with Ruth, the only woman he has seen in years. Ruth pleads with Frederic to take her with him, but her case is lost when a bevy of very young, attractive women appear.

Frederic appeals to the girls to overlook his pirate apparel and his past profession, but no one will listen until the beauteous Mabel appears. Frederic and Mabel fall in love instantly. The pirates return and Mabel warns them that their actions will not go unpunished since her father, the guardian of all of these young ladies, holds the exalted rank of Major-General. The Major-General is forced to pretend that he is also an orphan in order to win their sympathy. Although he fools the Pirate King, the Major-General cannot rest easy with his troubled conscience.

Meanwhile, Frederic is launching an attack on the pirates with the cowardly assistance of the police. But Ruth and the Pirate King interrupt him with a most ingenious paradox - Frederic was born in leap year on the 29th of February and, in terms of actual birthdays, is only 5 instead of 21. Frederic, slave of duty that he is, rejoins his former associates, and the police are left to attack the pirates on their own.

The Pirates seize the Major-General and the police are quickly defeated. But the Sergeant of Police charges them to yield 'in Queen Victoria's name' and the pirates cannot resist this overpowering appeal.

Ruth then reveals that the pirates are actually 'noblemen who have gone wrong'. Mabel and Frederic are happily united forever with the unqualified blessings of the Major-General.
The Pirates of Penzance
Musical Numbers