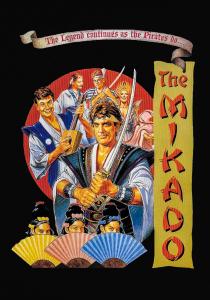 "An unfolding caravan of delights." The Sydney Morning Herald.

"No praise could be too excessive." The Australian.

Essgee's Mikado followed the success of Pirates  in 1995 and has proved so popular it was revived again professionally in 2008/2009.

The  idea for the fabulous singlettes evolved from the The Little Maids Song.

So in this adaptation their funky and naughty behaviour is most apt.

Our story begins in the town of Titipu in Japan where, having introduced themselves, Japanese nobles meet a wandering minstrel named Nanki-Poo. He tells them of his love for Yum-Yum whom he first saw as he was playing in the Titipu town band. Yum-Yum was engaged to Ko-Ko, a cut price tailor, but he has been sentenced to death for flirting, so Nanki-Poo returns to find his beloved Yum-Yum and marry her.

The death sentence for flirting is the idea of the bloodthirsty ruler of Japan, the Mikado. The gentlemen of Titipu decide to get round this law by creating Ko-Ko Lord High Executioner on the grounds that he is then unlikely to execute himself. All the senior Titipu civil servants resign in protest at these shenanigans only to find that the ambitious Pooh-Bah snaps up all their jobs, salaries and perks to become Lord High Everything Else.

Ko-Ko is set to marry Yum-Yum who arrives with her girl friends, Pitti Sing, Peep-bo and Yo-Ko - three little maids from school. When Yum-Yum sees the handsome Nanki-Poo, she is overjoyed since she does not love Ko-Ko, but duty makes her reluctantly realise that her wedding with the recently ennobled cheap tailor must take place.

Then a crisis hits the town. The Mikado is coming to visit Titipu to check that his savage law has been carried out. Since Nanki-Poo has decided to kill himself because he cannot marry Yum-Yum, Ko-Ko convinces him to become the necessary victim the Mikado wants to have executed. Nanki-Poo agrees on the condition: that he weds Yum-Yum and they enjoy a month's married bliss before he gets the chop - after which, Ko-Ko can marry her.

This seems to fit the bill, and everyone rejoices until another crisis descends in the frightening person of Katisha, an aristocratic older lady who was engaged to Nanki-Poo before he fled the court unable to face marrying her. She tries to reveal Nanki-Poo's identity as the son of the Mikado and heir to the Japanese throne, but the local people refuse to listen to her, and she storms off vowing revenge.

On Yum-Yum's wedding day, Ko-Ko brings news that due to another cruel law, the wife of a beheaded man must be buried alive, a fate Yum-Yum does not relish on account of its stuffiness. Pooh-Bah and Ko-Ko decide that the only solution is to do a snow job on the Mikado. They will let Yum-Yum and Nanki-Poo get married, pack them off abroad on a honeymoon, then draw up false documents and lie to the Mikado about the execution.

Accompanied by Katisha, the Mikado arrives and is informed by Ko-Ko, Pooh-Bah and Pitti-Sing of the alleged execution of Nanki-Poo. The deceit boomerangs however, since yet another crazy Japanese law insists that no matter how ignorant of their actions, everyone remotely associated with the death of the heir apparent must be boiled alive. Since the bloodthirsty and husband-hungry Katisha is keen to see the plotters killed, the only solution seems to be for someone to marry Katisha as quickly as possible, then get her to beg the Mikado for mercy. Ko-Ko draws the short straw and marries the dragon lady.

When Nanki-Poo and his wife appear, there is a lot of complicated explaining to be done. Fortunately, by a justification even crazier than the fictitious laws of the stage Japan, Ko-Ko manages to placate the Mikado, and with laughing song and merry dance, everyone lives happily ever after.

England has produced centuries of great writers and creative artists, but only very few have spoken a universal language, been taken to the hearts of the English speaking world and become popular institutions - icons of English speaking civilisation. It's all a matter of producing recognisable characters, lovable or otherwise, who speak and sing the language of the people. Chaucer did it. Shakespeare did it. Dickens did it. Shaw, perhaps, did it. And Gilbert and Sullivan did it with a derry down derry and a willow, tit willow, tit willow. Even those high- brows who hate G & S - and what other writers of comic opera in the world are recognised by the mere initials of their surnames? - are infuriated by the enduring success of these two friendly enemies who set the British Empire and its descendants humming and chuckling.

How many people reading this remember with affection the first time they saw a Gilbert and Sullivan opera ? How many recall the fun and magic of being in a school production or having a family member or friend in one ? Probably as many as can quote or sing as much or more G & S than they can recite Chaucer or Shakespeare or Dickens or Shaw or the lot of them put together.

It was theatrical manager and impresario D'Oyly Carte who recognised that the former two totally opposed personalities were perfect matching talents. This same entrepreneurial - or as we'd say today, 'showbiz' - genius managed to keep the quarreling partnership writing hit after mega-hit (twelve in all - more than any musical writers since) for fourteen years. And even after their final smash, The Gondoliers, they wrote two flops with more toe-tapping tunes in them than any of the successes of their day ... none of which has survived!

Known collectively as 'the Savoy operas' after the Savoy Theatre in London where most of them played, Gilbert and Sullivan's works instantly captured the imagination of the British - hence the Empire's - theatregoing public. They sang the songs. They laughed at the words. They recognised the characters. They relished the affectionate mockery of the fads and foibles of the day. In no time at all, Gilbert and Sullivan became more box-office than even Offenbach. Within one generation, G & S became classics of family entertainment.

It is probably only of Shakespeare and Gilbert and Sullivan it can be said that somewhere in the English speaking world, one their works is being performed every night.

And our object all sublime is to delight you with Savoy musical comedy at its maddest and merriest as we sing and dance the topsy turvy carryings-on of a wandering minstrel, a Lord High Executioner, a Lord High Everything Else, three little maids from school. a yumyummish heroine, a timidly bloodthirsty tyrant, a dragon lady whose bark is worse than her bite, and some of the wackiest and most athletic gentlemen of Japan the stage has ever seen - all a source of innocent merriment thanks to Gilbert and Sullivan.

Katisha, a mature lady .
The Mikado of Japan.