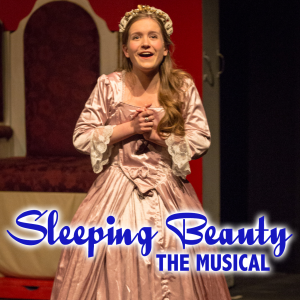 Delightful new musical adaptation of the classic with bright tunes, lots of laughs and an Australian sensibility.

We join the King and Queen of a far off kingdom as they celebrate the christening of their long awaited daughter Princess Crystal.

Sixteen years later we join the princess about to celebrate her 16th Birthday. The Bad Fairy’s curse has been long forgotten. Unfortunately, during the course of the Birthday celebrations and a game of hide and seek the Princess discovers an unexplored room in the castle where she meets with a quaint old lady (the bad fairy in disguise!) with a spinning wheel. The Princess soon pricks her finger and lies dying. Fortunately the Good Fairy comes to the rescue by weakening the Bad Fairy’s curse – but this means plunging the entire Kingdom into sleep until a the Princess can be awakened by a Prince with a true heart.

100 years later, Prince Goodhearted of Fingalshire (a neighbouring far off Kingdom), has returned from yet another disappointing quest to find himself a beautiful princess bride. His father and mother are dismayed to say the least – incidentally, it turns out that his father was formerly the frog who was kissed by a beautiful princess – and now here they are King and Queen of Fingalshire and living happily ever after.

Under some duress from his parents, Prince Goodhearted assisted by his loyal servant Simon resumes his quest for true love. Together they search their way via twisting paths and Woodsman who is au-fait with the ways of the Wavering Wizard to find the enchanted Castle in the sleeping kingdom.

There the Prince finds his sleeping princess and kissing her the spell is broken – Naturally they marry and live happily ever after! (The prince not the least bit concerned that his beautiful princess is now 116 years old)

WOODSMAN – A peasant in the woods with an attention to detail

DANCERS – these can double as guests and perform dance sequences

Stir and Chop and Beat and Pour.

Happy Ever After Backing Sample.