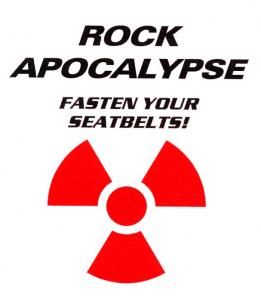 “ By far the best rock n roll musical I have ever read. The music is brilliant.” Robert Murray - Director.

Rock Apocalypse is rock n roll party show which is a parody and tongue in cheek tribute to horror and sci-fi B-movies from the 1950’s to the present day. The music is rock n’roll, blues, gospel, rock and anthem-based. And it is very funny. Though Rock Apocalyse is intended to be strictly for pleasure , it is also a sharp satire of our mass media driven culture where our thoughts, emotions, and perceptions are constantly altered by the barrage of ‘advice’ from advertising, film and TV.

Staged now in the UK, Australia and New Zealand.

Bob Carlton (author of ‘ Return to the Forbidden Planet ) “ The lyrics are very witty.”

Act 1. During a prologue, we hear of the death of 1950’s rock n roll icon Ricky Valiant. But we soon learn that Ricky has not died instead he has set up an evil Laboratory called the Somafree Institute where he is plotting to take over the world. In the Laboratory he lures unsuspecting victims - turning them into zombie like creatures - called Deadheads - after they undergo an operation called the Brain Drain.

We meet Dawn and Ash - who are having marital problems . They are referred to the Institute by their Councilor DR Cronenburg . Inside the clinic there are really weird staff. They include DR Enema, and Tiffany (a sexy nurse). The couple are separated and Tiffany immediately tries to seduce Ash without success. Dawn is Brain Drained and immediately becomes obsessed with Ricky Valiant. Ash is taken to meet Ricky. In a blaze of OTT rock n roll he reveals his evil plan. In a few days an orbiting team of satellites will broadcast his comeback concert all over the world, interrupting all TV programming. Anyone watching will become obsessed with him and will be turned into Deadheads - allowing him to rule the world. Ash fights but is restrained and is made into a Deadhead.

Act 2. The FBI infiltrates the Institute in a bid to save the planet. Tiffany sings of her love for Ash and manages to reverse the Brain Drain process after seducing a DR in the clinic. Valient’s broadcast supported by his new ‘bride’ Dawn begins. All hell breaks loose in the fight that follows involving Deadheads, Ash and FBI agents - filled with OTT sight gags, comic book violence and rock n roll. Ash interrupts Valient’s concert but is overpowered and the countdown to world dooms begins. Will the planet be saved? Is there any hope for Ash and Dawn’s marriage? - read the perusal script and score to find out.

Tiffany...A Nurse With A Problem

Secretary...A Secretary With A Mission

All upper ranges in head voice.
Ranges are flexible and may be transposed.

Welcome to the clinic.

The Good Times Rolled Away.