Dying to Meet You 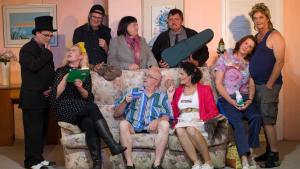 Hilarious fast moving comedy. Richard and his wife Barbara accidently offer the same room as lodgings to a young undertaker and a young woman who has the mafia after her.

Not helped when an Italian gentleman turns up with a violin case.

Richard and Barbara Taylor independently offer lodgings to a trainee undertaker and a young Italian girl.

Richard's attempts to keep his lodger'soccupation from Barbara, with the help of his neighbour Tom, lead to manyhilarious situations involving misunderstandings and visits from the mafia.