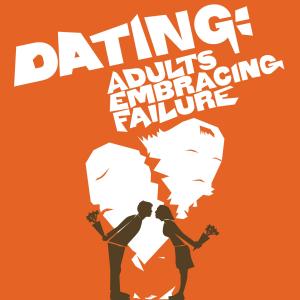 Every relationship fails until one doesn't. The trick is to find that special one.

The same combination of humour and heart that made ​I Love You, You’re Perfect, Now Change​ a regional hit will have audiences falling head-over-heels for this sketch comedy concoction.

In a series of vignettes, eight couples ‘Bumble’ through the frenzied world of dating in search of ‘eHarmony’ and a ‘Match’ that lasts. With all of the pickups and hiccups that come with first impressions and final goodbyes, Dating: Adults Embracing Failure ‘Tinder-ly’ proves that love can conquer even the world’s worst one-liners.

Two co-workers head over to their favorite Chinese restaurant to pick up lunch. The man misunderstands a question from the restaurant hostess, which spurs a conversation about why the co-workers haven’t tried dating each other. The man gives some bad answers, but finally admits to having feelings for her. She suggests he does something about it before one of them gets transferred to the LA office. The man offers to pay for the date and lets the hostess know they’re ordering as a couple. The scene ends with the two agreeing on that lunch being their first date.

An elderly couple meet on a park bench when the woman helps the man with his crossword puzzle. They get to talking and find out they both have grandkids. After the man innocently asks what brought her to the park, the woman mentions she has a boyfriend but quickly backtracks, realizing the man’s intentions were good. The conversation continues and they find out they’re both from Queens, New York and enjoy visiting art museums in their retirement. The woman subtly invites the man to join her at the museum, but he is unable to make it. He goes on to ask her out in the guise of a crossword clue. She says yes.

A man wakes up to multiple alarms set by the woman he’s in bed with. He exits.

A talkative woman holds up a line at a Starbucks. The man behind her asks if he can order ahead of her because she’s making him late. This starts a fight between the two strangers with the man accusing the woman of being a coffee scrooge and the woman accusing him of being self-involved and using his charm to get whatever he wants. They continue to shot for shot with each other until a drink is called. They both reach for the coffee and find out that they ordered the same thing. They agree that this is a sign he should ask her out, but she isn’t satisfied with how he asks and a brief final argument sends him on his way.

A busker plays guitar in a subway station. A woman misses her train but catches his eye. He begins to serenade her. While at first uncomfortable with his musical advances, the woman eventually drops a dollar in his case. Shortly after, she joins him in song. Another train comes, and he asks for her name as she leaves. Her name is long and complicated; he can’t get the whole thing before she has to go.

Two fiancés sit on the couch talking about their impending nuptials. The man asks if they can buy expensive sheets. This ends up being the last straw on the camel’s back. The woman picks him up by his collar and drags him to a chair. Lights go out except for one bright light above him, and she begins to interrogate him about whether or not he’s gay. She tries to be the bad guy by putting him in an uncomfortable chair, smoking, and breaking one of his favorite CDs. When that doesn’t work, she changes tactics and tries to turn him on. After this fails, she yells at him to tell her he’s gay and he finally relents sarcastically. He realizes in that moment that he is in fact gay. He goes to leave, but she asks him to stay. They bond over their favorite character in Seven Brides for Seven Brothers.

Two teens are at a middle school dance. The boy asks the girl to dance with him to the upbeat song playing. As soon as they begin to dance together, the song changes to a slow song. The two teens awkwardly slow dance until the boy starts to “get excited,” and he exits awkwardly with a fist bump.

The Chinese food co-workers are playing Connect Four while eating takeout. The couple jokingly argue about how the girl ate all of the cashews in their order of Cashew Chicken. Even though the couple agreed on a “no phones” rule so they could spend the night with each other, a call comes in and the man picks it up. He finds out he’s being transferred to LA. The woman pulls the bottom of the Connect Four board and the pieces fall out onto the table.

Both actors try their best breakup lines on the audience.

A woman, May, waits at a table for her blind date to arrive. A French waiter approaches the table to take her order. She lets him know she’s waiting for somebody and he breaks out of his accent and lets her know it’s actually him she’s waiting for— Dave! The opening of the date quickly reveals that Dave is incredibly awkward on first dates and constantly makes jokes when he can’t think of anything else to say. He uses his water glass as a crutch, taking sips whenever there’s an awkward pause. Once he runs out of water, he lowers his head in embarrassment and admits he’s nervous and hasn’t truly been himself. He goes on to answer all of May’s previous questions with honest responses, but admits that he realizes he’s ruined the date already. May counters his assessment to reveal some of her flaws and that she thinks she knows the person she’s sitting across from. The two let their weird flags fly as the scene fades out.

Dave stands alone at a funeral. He speaks to May, who we learn has died in a bike accident. He tells her about the first time he saw her and how he knew he loved her from that moment. He tells her about hearing their favorite Paul Simon song on the radio after she’d passed. He begs to have one more day with her, but soon acquiesces to the inevitable. He makes his peace, and says goodbye.

A female mime enters the stage and begins showing off her miming abilities. A male mime enters and quickly competes with her. They go back and forth, in silence, until the female mime offers him a balloon. He takes it and it carries him off the stage. He re-enters with a hot air balloon and whisks her away. The balloon breaks and they fall in the ocean where they outswim a shark. They get away, but the woman is so annoyed with the man that she throws him in a box and locks the door. The male mime tries to get out, but runs out of oxygen and suffocates.

A woman cries while watching a sad ASPCA commercial on television. A man enters and comforts her until the commercial is over. He goes to walk away but she rewinds it and watches again. After doing this a second time, he grabs his coat and leaves.

The elderly crossword couple sits on the same bench. The woman makes noises to get his attention so he can help her with a clue. Once he agrees to help, she makes noises again so he can’t think. He suggests they break up, and goes on to explain that they aren’t on the same page anymore. She relents and they agree to breakup. They both acknowledge that they’ll see each other for dinner that night.

A couple comes back from a first date and the man, confident in how the first date had gone, asks for a second date. She turns him down and sings loudly that she’s better than he is. He leaves.

A man congratulates his castmate on a great rehearsal. He asks her for drinks and she declines, citing the fact that she always thought he was gay. When he presses her as to why, she gives stereotypical reasons that reveal this is the couple that was engaged. He asks why that automatically makes him gay and she admits that it doesn’t. He convinces her to go for a drink and she agrees.

The Chinese food couple packs up the man’s boxes in anticipation for his move to Los Angeles. A disagreement over how often the woman would visit leads to the woman proposing they break up. Incredibly upset by this, the man fights the decision. The woman finally withdraws the idea only to have the man realize that she’s right. They reluctantly break up even though they still love each other.

The couple from Starbucks board a plan. The woman finds out the couple isn’t seated together and asks the man if he did it on purpose. They start to argue loudly, and the woman seeks out the flight attendant for help only to find out there aren’t other seats available. Their fight boils over and they both angrily agree to break up. The man suggests they’ll have to unpack their bag because they shared one, and the woman asserts that they bought a package and they’ll be going through with the vacation. The man, beaten down, agrees.

The man from the Chinese food couple orders a dish alone at a Chinese takeout place. The girl comes up behind him and surprises him.

The crossword couple sits in different chairs facing away from each other. They exchange missed glances.

Dave holds May’s bike helmet in his hands. He puts it on.

Man – (mid-20s – mid-30s) An everyman, plays ten characters ranging from a young business professional to a flirtatious musician to an elderly man from New York. Must be a strong actor able to switch seamlessly between many very different characters. Singing ability required.

Woman – (mid-20s – mid-30s) An every woman, plays ten characters ranging from a cartoonish interrogator to a competitive mime to an overly confident dater. Must be a strong actress able to switch seamlessly between many very different characters. Singing ability required.