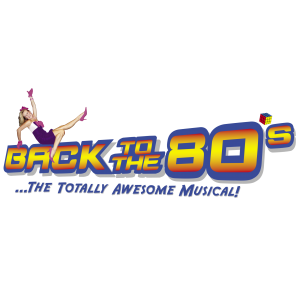 From the era that brought the world The Rubik's Cube, Max Headroom and The Teenage Mutant Ninja Turtles comes this "totally awesome" musical in the style of movies such as Back To The Future, Ferris Bueller's Day Off, The Karate Kid and The Wedding Singer.

Join the graduating class of William Ocean High School as they live through their final senior year - as they experience the fun, the heartbreak, the loves and the loneliness of growing up.... all set to the biggest hits of the 80's!!

Set in the USA, Back To The 80's tells the story of the senior class of William Ocean High School that graduated in the 1980's, as remembered and seen through the eyes of Corey Palmer, who is now 30-something.

The then 17-year-old Corey is madly in love with his next-door neighbour, Tiffany Houston, one of the coolest girls in the school. However, she barely notices this, as she is too busy mooning over Michael Feldman, the hottest guy around. Michael and his friends are athletic and good-looking - the kind of guys that Corey and his two best friends dream of being. However, while they may not be the coolest guys in school, they are still one up on Feargal McFerrin III, whose best friend is his computer, and who believes the crazy notion that one day CD's will replace cassette tapes.

The narrator of the show.  Corey Snr is pushing 30, living in the year 2000, and reminiscing about the 80’s (his school days), and his love for Tiffany Houston.  He is similar to the older voice-over of Kevin Arnold from the Wonder Years.  He is able to move the story along, comment on action as it is happening, and even provide the internal thoughts of his younger version (Corey Palmer Jnr) in the midst the action.

The hero of the musical.  Although it does not focus solely on him, the story is largely about his life, and the people and events surrounding him throughout the 1980’s.  He is 17 during his Senior Year.  He is a very likeable, very ordinary American teenager, experiencing the events that every young male goes through. Unfortunately for him he is doing it in a time of hypercolour t-shirts, big hairdos and fluorescent white pants.

One of Corey Junior’s two best friends.  He is a likeable teenager, only just coming out of childhood.  Whereas the “cool” group of guys (Michael, Billy, Lionel and Huey) are into adult things like girls, cars and sports , Corey and his mates (particularly Alf) are only just coming out of the phase of racing bikes and burning ants with magnifying glasses Maybe this is because they are still young at heart – or maybe it’s just because they are just immature, and don’t get much female attention!

Corey’s other best friend.  Corey, Alf and Kirk are very tight, but they are rather naïve, particularly about women. All three of them come from excellent family homes and are probably considered to be the “nice” boys of their year.  Unfortunately for them, “nice” does not lead to lots of babes, hard parties or cool status among the rest of their year.

Tiffany is one of the group of girls that “Just Wanna Have Fun”. She is a cute, bubbly teenage female from the 80’s – aspiring to be Cyndi Lauper and Madonna rolled into one.  This brings with it the burdens aspiring to be a Material Girl – big hair and copious amounts of make-up.

She has been Corey Jnr’s neighbour since they were born, and they are good friends. She seems oblivious to his deep-seated love for her, probably because she is too busy mooning over Michael Feldman – and applying more blue eye shadow!!!

One of Tiffany’s best friends.  Rather than having a best friend, all these kids seem to have groups of best friends.  Whereas Tiffany is fairly innocent, naïve and doe-eyed about boys and love, Cyndi is more street-smart.   Cyndi knows that boyfriends are a passport to attention and presents.  As with every other female, she would love to have a fling with Michael Feldman, but she settles from time to time for Billy Arnold, or Lionel Astley, or Huey Jackson - or anyone else from the football team who is around.

Another one of the inner click of “The Cool Girls”.  She is an all-singing, all-dancing party girl who seems to be happy to be taken along with the group of girls, and burst into song whenever the opportunity arises.  With her twin sister Kim, she seems to have a natural affinity for harmonizing, and for backing up solo singers, which is very lucky because Cyndi and Tiffany both continually break into show-stopping 80’s tunes.

The twin sister of Mel – although for ease of casting, they will probably be fraternal, not identical. Mel and Kim are new to the school, but they have been friends with Cyndi for a long time, so they are automatically accepted into her group. Kim does not do well at school, and makes the decision halfway through their senior year to leave. However, she is talked out of this by her friends. The option of parties, boys and a little bit of studying is far more tempting than working nine to five.

The coolest guy in the school. The girls all fall at his feet.  He is a car-driving, Fonzie-styled football star.  He has the romantic attention of all the girls, but particularly Tiffany Houston (who Corey just happens to be in love with.)

Michael is very suave in the presence of any females. However, when they are not around he shows his true colours – he is a mean, manipulative oaf who picks on smaller kids.  The girls never seem to see this side of him though.  To them, he is a God. Fortunately, by pure coincidence, his name can be shortened to “Mickey”.

One of Michael Feldman’s posse.  Another popular, good-looking, athletic guy.  The kind of person that every 17 year old wants to be (particularly if they are not popular, good-looking or athletic!!) When Billy is around Michael and his group, they all assume coolness. But, like the others, when he is by himself, Billy is a little lost, particularly without Michael’s advice.  He makes the misguided decision to dress up like Rick Astley and hire backup singers in an attempt to serenade his way into the heart of Cyndi.

Lionel is fairly similar to Billy. All of the cool guys walk and talk the same way, but they all have slightly individual personalities. The group is stronger than the individuals.  In Lionel’s case, he is not quite as cool as the others, but because he is in the group, the girls put up with him anyway.

The final guy to round out the group of Michael Feldman’s friends.  Not much else to be said -  big hair, wears clothes that were cool at the time, but now just look like fluorescent mismatches of colour. Huey is an 80s tragic -  he is the only member of the cool group to go as far as wearing a white Michael Jackson glove – as was the fashion of the day!

The school nerd!  Feargal is a nice, sensitive young male – but that doesn’t count for much when you are 17, get good marks at school, wear glasses….and still a virgin!  As a side note, pretty much everyone in the show are virgins, but at least it is conceivable that the others may not stay that way until they are 30.  With Feargal, this is a definite possibility!  Feargal is supremely intelligent, but his visions of life in the new millennium are always laughed at. He is taking self-defense classes with Mr Miyagi, which proves very fortunate towards the end of the show!

Elieen arrives at William Ocean High School during the year.  She is a charming girl – full of life and vitality. She is also a dreamer who lovingly longs for the day when she has a boyfriend.  However, she is rejected by the popular girls upon her arrival to the school, so she is destined to hang around some of the less popular girls at the school (namely Laura and Debbie). Consequently, they boys are rather cold to her, and some of them make fun of her behind her back.

One of the girls that adopts Eileen into their group when she arrives at the school. Laura and Debbie have been best friends for years. This is not necessarily by choice, but more by the fact that neither of them fitted in anywhere else, so they found each other.  They are basically nice girls, but they have no luck with boyfriends.  However, this does not stop them from spending hours ogling at posters and dreaming about Corey Haim, Corey Feldman and Anthony Michael Hall.

As with Laura, Debbie is happy to accept Eileen into their group of two people - because there is safety in numbers when you are not accepted as being cool. She also has a tendency to spend too much time looking at posters of all the movie hunks of the time.  Both girls have trouble distinguishing between reality (i.e. that they have had no boyfriends) and fantasy (that they are married to Neil Patrick Harris – Doogie Howser).  They make up imaginary boyfriends to impress each other, and these boyfriends always seem to take on the features of the pinup of the month.  Strangely, n8either girl has ever met any of the numerous boyfriends that the other has had.

The only female teacher at the school to be seen. She is around 30, and is the Senior Students Co-ordinator. On the surface in front of classes of children she seems very reserved, very friendly and slightly conservative.  What they don’t know is that at 18 she posed nude for Hustler.  She has an on again, off again relationship with Mr Cocker.  That is to say, it was on while he did not know of her history, and off when he discovers that she stripped for a magazine shoot for $100 (which was big money in those days….as our mothers would say!!)

The Deputy Principal and maths teacher at William Ocean High School.  He is one of only two teachers who will appear in the show. Stevie sees a future together with Sheena, but has major issues when he discovers he is dating a former centerfold (even though she is now a respectable, conservative English teacher.)  Stevie has problems with erasing the image of Sheena’s prior modelling from his mind.

The sometimes talked about but never seen Japanese Teacher at the school.