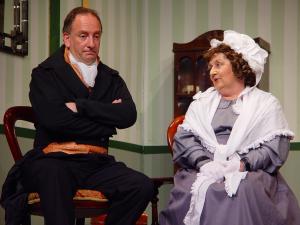 Lose your heart and come to your senses as you follow the fortunes of Elinor, the sensible sister and Marianne, the sister who is ruled by her feelings. The reserve of one sister and the lack of reserve of the other can equally lead to their undoing as they struggle to come to terms with the poverty thrust upon them by their father’s untimely death.

This play was first produced by the Genesian Theatre, Sydney in 2005 and had a successful season in Boston the following year.

"... watching this novel come alive will be exactly your thing." Larry Stark, The Theatre Mirror (Boston)

"...sure to appeal to the large number of Jane Austen fans who are out there ...the adaptation hews closely to Austen's dialogue, and makes the story feel as dramatic as possible." David Brooks Andrews, MetroWest Daily News (Boston)