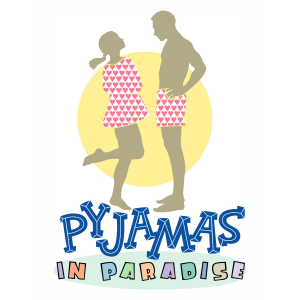 Before there was Schoolies, there was Pyjamas in Paradise!
In the late 1950s and early 1960s, pyjama parties attracted thousands of young people from all around Australia to the small resort town of Surfers Paradise. Their popularity put Surfers on the map.

This musical is a bit like Grease but everyone has an Australian accent.

With original music and classic hits including Rock Around the Clock, Shakin All Over, Pink Shoe Laces, The Great Pretender, It's My Party, La Bamba, Itsy, Bitsy, Teenie, Weenie, Yellow Polka Dot Bikini, Summer Holiday and I Remember You.

Follow the story of Bruce Large – retired (kind of), fast talking (always), larger than life (definitely) and his controversial dream to turn ‘Surfers’ into paradise!

Around 20. An Olivia Newton-John type. Sweet. Romantic. A kindergarten teacher.

Around 22. The all-Australian boy. Nice looking. Sincere. A recent graduate in engineering.

Around 22. A well-built, sure of himself, rough diamond. Talks big. Gives the impression he is a lot more experienced than he is. A carpenter.

Around 20. Blonde, cute, pert – can come up with great one-liners and put-downs. A nurse.

Around 22. A short guy who is shy but sincere and nice. No experience with girls. An accountant.

Around 20. Tall (or big). She towers or dwarfs the others. She is pretty and nice. A hairdresser.

Donna’s mother. A concerned mother. Around 40. A wido who has worked to give Donna a good life. She lost her husband in the war, but wants Donna to marry Jack, her best friend’s son, and has ‘pushed’ the romance.

Barry’s father. An ordinary working man. Good bloke who has made wrong decisions. He has raised Barry since his wife ran away. Proud of Barry who has graduated from University.

A glamorous but much older-than-she-looks party girl who has drifted around the country from town to town, man to man. Someone who is forty but looks much younger.

An aging beach bum. 30s. Well built. A charmer. Loves the girls but, like Diana, is a drifter with no firm ambition or roots.

A millionaire retiree who came to Surfers Paradise to retire but was inspired to become a developer. Surfers is his passion. He is a fast talking enthusiast in his mid-50s.

Bruce’s overdressed and socially aware wife who plays second fiddle to his ambitions. Having no children, she has focused her life on Bruce. Loves the success. Mid-50s.

A non-speaking role. A very shapely and glamorous bombshell-type girl.