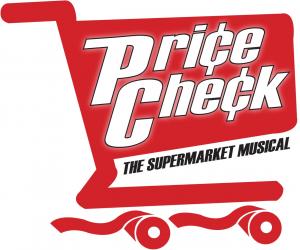 The world's first post Covid-19 musical, set in a suburban supermarket the year after the pandemic.

A colourful cast of quirky characters fight to keep the independent business afloat against a major chain store.

They all do their best to make meaningful connections in a world full of differences, whilst suffering the pressures of their own lives.

"This musical is just packed to the cereal box top with pure, unsaturated fun." Glam Adelaide.

"The musical numbers are catchy and clever." Broadway World.

"This quirky tale is hilarious. I could see it being picked up by secondary schools across the country," Stage Whispers.

Price Check! was originally written as a musical comedy that explored the lives of five diverse characters in a suburban supermarket.

A well paid profit hungry store manager, with a bitter divorce and a bad dance routine.

A middle aged widowed checkout chick, slowly working her way through the junior shelf fillers in search of romance.

A new Indian migrant struggling with the strange Aussie vernacular, whilst displaying a unique devotion to his work.

A geeky store assistant flaunting his arts degree whilset hoping for an in store promotion to help fix his failed marriage.

An elderly patron suffering from loneliness and a bout of sharp tongue.

In 2020 the script was updated to include five more minor principal roles and chorus.

They include a divorced teacher who was banned from the store, for hoarding toilet paper during the pandemic.

Act One is set in late September.

Read a detailed synopsis in the script sample below.

Narelle Sims (40) – A checkout chick and victim of circumstances.

Zayeeb Dash (25) – An Indian immigrant with a kinky fetish.

Mrs Zimmerman (75) – An elderly Jewish lady with a hearing impairment. ( Can be substituted for an ethnicity reflected in your local community such as Greek, Italian, Lebanese, South Pacific Islander etc.)

(New characters introduced in 2020 for a larger cast)

All I ever wanted Backing Track Sample

Am I Crazy Backing Track Sample