Jack and the Beanstalk (Musical) 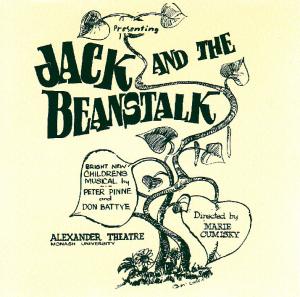 “Has wit, slapstick comedy, and enough catchy tunes to have audiences singing and laughing along with its cast” (Sun)

The story of Jack and the Beanstalk has been around for centuries, well since 1730 when the first printed version was published. The show in various forms became a staple on the pantomime circuit in the last century.

This new version was inspired by a Drury Lane, London, production in 1910 where the Giant was so big you only ever saw his boots walking across the stage. In keeping with the pantomime tradition, this version also boasts a Dame, a fortune teller, dancing vegetables, and a cow that cries.

The soft-rock score abounds with show-stopping chorus numbers and soaring ballads. As the critics said, “it’s a modern, fast-moving and totally entertaining panto.”

Jack and his mother Dame Misery are broke. They decide to sell Minnie their cow to pay the rent.

Mayor Greedy wants to get his hands on their house, one of few remaining in the town that he doesn’t own.

On his way to market with Minnie, Jack meets Mayor Greedy and sells Minnie to him for three magic beans.

His mother is furious with him and throws them out the window.

At the fair he is consoled by Madam Fortune, a fortune teller who only sees good things.

Overnight one of the beans grows into a giant beanstalk which Jack decides to climb. Above the clouds he meets the Giant’s wife, and Sarah, a princess who’s had a spell put upon her. It can only be broken if someone plays the golden harp in the Giant’s kitchen.

Sarah tells Jack the Giant eats people and the only thing that will stop him is if you take away his moneybag and his golden goose. Jack is determined to do it. He and Sarah sneak into the Giant’s kitchen. Jack grabs the Giant’s moneybag and golden goose and is about to run away but the Giant captures Sarah in his hand. Jack vows to save her.

Back on earth Dame Misery is overjoyed at their new found wealth. Jack gives the money away to everyone in town, much to the displeasure of Mayor Greedy.

Above the clouds, the Giant is in a filthy temper at losing his prized possessions and orders his wife to find the boy. He wants him in his stew.

In Jack’s barn, Jack is trying tyo get the golden goose to lay an egg, but he doesn’t have the right magic words. By accident he discovers them and to everyone’s surprise a golden egg is laid. Jack returns above the clouds to rescue Sarah.

They manage to steal the harp, elude the Giant and his wife and return to earth. Mayor Greedy and Dame Misery are both distraught – he because the town have paid all their bills, and she because she is back where she started because jack has given all their money away.

Madam Fortune very quickly convinces them that being rich isn’t everything. Jack chops the giant beanstalk down and prepares to live happily ever after in a castle on the top of a mountain with Sarah.

Jack
18-20 A young and headstrong boy, who is good-hearted and abounds with the energy of youth. An adventurer. Must be able to sing.

Dame Misery
40-50 A poor woman who makes the best of what she’s got. A Panto Dame role.

Mayor Greedy
40-50 A well-fed, rotund man who is happiest when he has people at his mercy.

Madam Fortune
40-50 A delightfully fey woman who only sees good in her crystal ball. Soprano range.

Giant’s Wife
40-50 A no nonsense woman who is under the thumb of her husband.
Must be able to sing.

Sarah
18-20 A pretty, feisty, young Princess. Soprano range. Must be able to dance.

Minnie (Cow)
A pantomime cow with one person as the head and one as the tail. It should be able to squirt tears from its eyes.